From a Danish-German consortium intend to develop a vaccine protecting against urinary tract infection. The SVEET project (Sugar-modified Vaccine Epitopes; Exploration and Translation) is funded by the German DLR and the Innovation Fund Denmark with 702,800 Euro within the eurostars® programme.
10.05.2021

PDF Download
04.11.2016
Kai Simons, founding director of the Max Planck Institute of Molecular Cell Biology and Genetics (MPI-CBG) and managing director of Lipotype GmbH, receives the Robert Koch Medal in Gold for his lifetime achievements, in particular for his characterization of membrane-forming lipids and the development of the lipid raft concept. 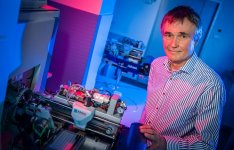 Berlin/Dresden, 4 November 2016: Kai Simons, founding director of the Max Planck Institute of Molecular Cell Biology and Genetics (MPI-CBG) and managing director of Lipotype GmbH, receives the Robert Koch Medal in Gold for his lifetime achievements, in particular for his characterization of membrane-forming lipids and the development of the lipid raft concept. The Award Ceremony takes place on Friday, November 4th 2016 at the Berlin-Brandenburg Academy of Sciences and Humanities.

Simons has spent his life studying cell membranes, wafer-thin bilayers of fat molecules (“lipids”) that surround each cell of the human body and most cellular compartments. Kai Simons discovered floating nano-assemblies of lipids and proteins in the lipid bilayer of cell membranes that reminded him of the log rafts which Finnish lumberjacks used as platforms drifting downstream – hence the name “lipid rafts”. Simons demonstrated the fascinating properties of these rafts: They are fluid and dynamic, they can appear and disappear. Lipid rafts do not only play a significant role as functional platforms in signal transduction and many other membrane processes, but they are also involved in many diseases such as Alzheimer’s disease and AIDS.

“I am overwhelmed!” says laureate Kai Simons. “This award is inspiring and I hope that lipids and lipidomics will continue to stimulate molecular life science research, but ultimately also help to improve health and clinical performance”.

Kai Simons started the Cell Biology Program at the European Molecular Biology Laboratory (EMBL) in Heidelberg and moved to Dresden in 2001 to build up the Max Planck Institute of Molecular Cell Biology and Genetics. Kai Simons received numerous honors, including the Keith Porter Lecturer of the American Society for Cell Biology. He received a honorary degree from the Universities of Geneva, Oulu and Kuopio (Finland), and Leuven (Belgium). Kai Simons is also a serial entrepreneur. His current venture, Lipotype GmbH, has developed a novel lipidomics platform for personalized medicine, functional foods as well as for novel dermatological and cosmetic products. Most importantly, the blood lipidomes that Lipotype can provide promise diagnostic breakthroughs for personalized health and medicine.

The Robert Koch Foundation, founded in 1907, is a non-profit foundation for the promotion of medical progress. It supports basic scientific research in the field of infectious diseases, as well as exemplary projects designed to address medical and hygienic problems. The Foundation annually awards the Robert Koch Gold Medal in recognition of the outstanding life’s work of a scientist.

Kai Simons received his MD degree from the University of Helsinki. He then conducted postdoctoral research at Rockefeller University in New York. In 1967, he was Principal Investigator of the Finnish Medical Research Council at the University of Helsinki. In 1975, he moved to the European Molecular Biology Laboratory (EMBL) in Heidelberg, Germany, where he started the Cell Biology Program, which became the focal point for molecular cell biology in Europe. In 2001, Kai Simons moved to Dresden to build up the Max Planck Institute of Molecular Cell Biology and Genetics. This institute became an internationally recognized center in its area of research. Simons’ recent research focuses on cell membrane organization and function. Kai Simons has pioneered the concept of lipid rafts as a membrane organizing principle, based on the phase-separating capabilities of sphingolipids and cholesterol in cell membranes. Kai Simons is a foreign member of the National Academy of Sciences, USA, and was the President of the European Life Scientist Organization. From 2007 to 2008, Simons was co-director of the Shanghai Institute for Advanced Studies of the Chinese Academy of Science. His biotech experience includes co-founding the Biotech-Start-up Jado Technologies, Lipotype GmbH and membership in the scientific advisory boards of Biogen and Sanofi.

The Max Planck Institute of Molecular Cell Biology and Genetics (MPI-CBG) does pioneering basic research. 500 curiosity-driven scientists from over 50 countries ask: How do cells form tissues? The general approach of research is to dissect basic cellular functions and to identify where they are modified or amplified in development and evolution in order to bring about diversity. Researchers investigate the molecular principles underlying morphogenesis, such as regulation of size and shape, and how the morphology of cells and tissues emerges from the interactions between individual molecules and cells. Ultimately, the goal is to take a multi-scale approach to link tissue-level organizational principles to molecular activity.

The Max Planck Society is a science organization with a long tradition: for more than 60 years, it has stood for exceptional, results-oriented basic research in the life sciences, natural sciences and the humanities. In 1948, it became the successor organization to the Kaiser Wilhelm Society, which was established in 1911 and is where, in addition to Planck, such renowned researchers as Albert

Einstein and Otto Hahn had worked. And just like them, Max Planck researchers today continually advance into new dimensions of knowledge. To date, 18 of them have been awarded a Nobel Prize. That is also why the Max Planck Society and its 83 research institutes enjoy a strong reputation in Germany and abroad.

Max Planck Innovation is responsible for the technology transfer of the Max Planck Society and, as such, the link between industry and basic research. With our interdisciplinary team we advise and support scientists in evaluating their inventions, filing patents and founding companies. We offer industry a unique access to the innovations of the Max Planck Institutes. Thus we perform an important task: the transfer of basic research results into products, which contribute to the economic and social progress.

Lipotype is a spin-off company from the labs of Kai Simons and Andrej Shevchenko of the Max Planck Institute of Molecular Cell Biology and Genetics in Dresden, Germany. Drawing on many years of cutting edge research experience, Lipotype delivers comprehensive, absolutely quantitative lipid analysis services for clinical and biological samples on a high-throughput scale. Lipotype offers its services to a wide range of customers and for applications including biomarker identification for clinical researchers, pharma and biotech companies, functional food development for the food industry, claim support for the cosmetics industry, as well as for the small-scale profiling needs of academic researchers.